Greetings! It’s been a good few days during which we completed our fifth profile. At greater than 160 OBS deployments and recoveries over the entire cruise, we have set some personal records and provided plenty of fodder for poking fun of Ingo (“you haven’t worn us down…. yet”). Between operations we handle all the data management, and some analysis, but we also

take some moments off to lie on the “steel beach”, the open deck above the bridge where people read and listen to music. Yours truly did so yesterday and inadvisably fell asleep, so now I am the color of the “lobsters” (“the lobsters” are our term for the orange hydrophones). We also have access to the gym or various outdoor corners of the ship for exercise, and even have a sauna though it hasn’t had much use in this balmy Caribbean weather. Movie nights have become another tradition when we have downtime. So far we’ve done “North by Northwest,” “the Big Lebowski” and “The Matrix.” We also have some guest bloggers signed up and a T-shirt design in process, so come back for updates!

For the profile (number 5) to the east of the spreading center, we just shot a section of densely spaced (2 km as opposed to our usual 5 km) “lobsters” as well as OBS. Cord Papenberg from GEOMAR will use these to try out some inversion techniques that ought to tell us a lot about the lithospheric structure in the older crust that was spread off axis.

Remember how I described the suspenseful planning of our final deployments? As the end of the acquisition program comes closer, we have a pretty good read on how this will play out. You see, in mid-ocean ridge systems we are very concerned about how symmetric the spreading is. Does one side spread faster than another? Does one side have a thicker crust than the other? Some of these questions tie into a question surrounding the style of faulting on the ridge. Draw a line at an angle on a piece of paper. One side will taper outward, and one inward, no? Well, imagine this line is a fault cutting the crust. This can impose asymmetry if the ridge is extending by faulting. We were having this discussion and it became clear that both operationally, in terms of time and resources, and scientifically, we should conduct an OBS profile on the conjugate (the counterpart) to profile 5 found west of the spreading center. This current plan, about to begin, should allow us to test some really important hypotheses about symmetric vs. asymmetric spreading in ultraslow spreading centers.

I think this little story about our operations shows how people with different expertise work together at sea to respond to changing circumstances, thereby getting the best science done with the time and resources available. It’s why we can’t just mail these OBS to the ship and have the crew toss them over the side while we sit at home. Instead, marine science is an 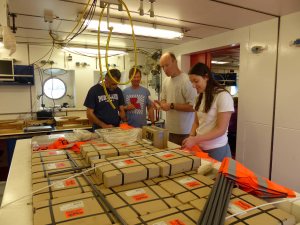 active, involved endeavor. What is really difficult about it is that every second counts – even now we are watching the clock and mentally recalculating our final deployment schedule – yet there are long stretches of waiting. It takes a special team to keep their cool in the face of that dilemma.

OK, I’ll be back at a future entry with more science explanations, and we’ll update the photos and images at some point as well. ‘Till then!